What You Should Be Doing In The Meantime

God will reveal you to the world when God is prepared to do so. In the meantime, do the work that God has set before you. And above all else… Live. Feel. Love. Laugh. Experience.


“Why haven’t I found success yet?”

“When is it finally going to happen?”

Does any one (or more) of these sound like something you’ve said or asked before? I can say with complete honesty that I’ve probably asked every single one of these questions of God at one time or another. And fairly recently, at that.

The first thing I want to tell you is that it’s okay. It’s entirely natural to ask these questions. In fact, it’s great that you’re attempting to strike up any dialogue with God at all, and even moreso that you’re looking for answers from Him.

But I’d be willing to bet that you’re frustrated because you don’t appear to be getting any answers in reply. Not anything very clear or definitive, in the least.

That’s because the second thing that I want to tell you is that you’re asking the wrong questions. After all, you know that God has an end-game in store for you; you know that He’s going to open those doors when He chooses to do so; you know that “it will all happen” when He is ready.

So the question of when – and maybe even how – is irrelevant. If you trust Him, His plan for you will unfold when He wants it to.

Stop concerning yourself so much with that. Leave that to Him.

The question you should be asking is “Lord, what can I be doing in the meantime?”

What You Should Be Doing In The Meantime 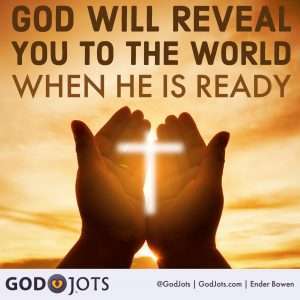 So often in life, we become overly consumed by the idea of “arriving”; by finally breaking away from that mundane job or that “normal” life and seeing our hard work bear real fruit – the fruit we’ve dreamed of our entire lives. We tend to focus so much on that end-game that we forget we’re actually living a life in the meantime.

And if we’re living a life in the meantime, isn’t there a purpose to that? Isn’t there a reason that God hasn’t just “made it all come to pass”?

If you died tomorrow, having never truly “made it”, would you sincerely believe you never really lived at all?

God will reveal you to the world when God is prepared to do so. In the meantime, do the work that God has set before you. And above all else… Live. Feel. Love. Laugh. Experience.

You may just find out that, interestingly enough, that is where God’s plan for you is ultimately revealed.

4 Comments to “ What You Should Be Doing In The Meantime”