Looking For A Return On Emotional Investment

An Obsession With Shaming And Insulting Others

You can’t land anywhere on the internet these days without seeing other passersby doing their best to completely shame and insult those who disagree with them.

They’re in the comments of virtually every CNN or FoxNews article (or just about any other publication’s website). I strongly suggest not going there if you happen to like to think. Like, at all.

Facebook and Twitter? How do any of us still have friends?! The level of bullying there is enough to make one ask “and we wonder why our kids are bullies?” Family members too. (Why do you think I don’t use my real last name?)

Your favorite band’s forum? Even the really hippy “war is bad, m’kay” ones? Yeah… that can get really nasty. Like napalm forehead bad.

Professional wrestling news and rumors sites? Oh… that one’s just me… And at least seven other guys.

And they’re all mean.

If you think for one darn same-day second that the reviews and comments (and even the questions) on Amazon are immune, think again. Then think one more time after that. You may need a fourth time. (It varies from person to person). I mean, seriously, people who are just looking for some information about a potential product purchase are in for a real dose of “how could you even…”

I could blame this all on the internet being the internet. Certainly, our ability to remain, in certain senses, anonymous has to have had an effect on this kind of behavior. I think, however, that what it has really done has augmented a problem we as human beings have always had when it comes to those with whom we vehemently disagree.

And it’s never been good strategy.

In my mind, the purpose of dialogue – particularly with those of differing opinions – isn’t just to broaden horizons or to learn more about other points of view. I think it’s also a marketing device. Or a negotiation. 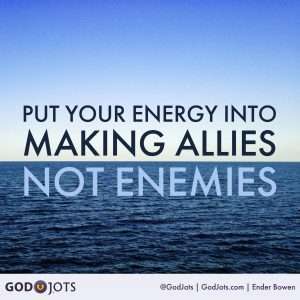 Think about how politically divided we are in this country. It would be a fair observation to approximate it at half-and-half. With an even fifty-fifty split, not a whole lot is going to get accomplished by either side.

But what if you were to win some of those dissenting folks over? What if you could tip the scales a little bit in your side’s favor?

Does it make sense to shame those folks – to ridicule and insult them? To dog their integrity and intelligence to the point where they want even less to do with you than they already did? How does that tip the scales? How does that help your cause?

Even better, what about those who wouldn’t otherwise be that difficult to win over, except for the fact that the way you conduct yourself makes them want to stay as far away from you as humanly possible? Why would anyone look at that kind of behavior and say “I want to be on that guy’s team”?!

I imagine myself kind of like I’m promoting a product. If I want people to buy that product, insulting them is probably not the best way to go about it. And if all I’m doing is shouting and name-calling, then I’m not listening. How am I supposed to convince this customer that my product is useful to them if I don’t even know what they want?

Not all disputes or differences of opinion fall into a “we need more peeps to make this thing happen” box. I get that. But I think there is still something to be said for fair, honest, and respectful dialogue with opposite-minded people.

Are we so afraid of thoughts different from our own that we have to destroy any semblance of them?

That kind of wonton destruction doesn’t take much critical thinking.

But it sure does take one heck of an emotional investment.

Even if you’ve never had any involvement in running a business, you’re probably familiar with the term “return on investment”, or “R.O.I.”. 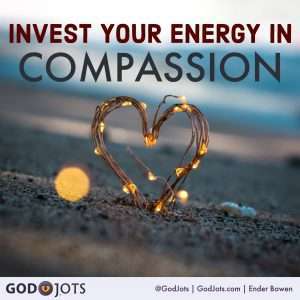 The essential idea behind a “return on investment” is that you invest something – typically money – into something else, expecting that investment to grow into something larger (like a larger sum of money), or perhaps better or useful (like better time management or productivity).

This could be anything from investing in a startup, to purchasing a monthly RedBooth subscription. By investing money in the startup, you expect that business to make money, thus earning you more than what you initially put in. By investing funds into that task management system, you expect to have better time management and productivity with the projects you’re doing for clients.

In any event, what you’re looking for is a valuable return on investment – a return that yields better or more value than what you put into it.

But what if there was such a thing as a “Return On Emotional Investment”? In other words, what if you could measure the amount of time, effort, and energy you put into all those emotional reactions? After all, if you’re going to put all that emotional energy into name-calling, shaming and insulting anyway, why not use it for something that actually has more value on the other end?

When I invest in something, I expect something else good to come out of it. Something better.

Where’s the “better” in someone leaving a conversation in a huff, unlikely to ever see your side of things?

Where’s the “better” in someone unfriending you on Facebook?

And where’s the “better” in leaving things undone, uncompleted, or uncompromised? What gets resolved? What changes?

It’s about a measurable Return On Emotional Investment (which, as it turns out, takes a little critical thinking, too). If you are giving someone your attention and your emotions and trying to turn all that into something, what is the ROEI that comes out? What are you getting out of it? And what is the other person getting out of it?

What are you trying to accomplish?

And are you and the other person (or people) with whom you’ve just interacted better for it?

What happened the last time you shared a dialogue with an opposing viewpoint? Did you see a return on your emotional investment? What could you have done better to see a higher ROEI? What things might you suggest?