If we truly want to do God’s work and fulfill the destinies He has for us, we need to take His challenges on, and be grateful for them.

God’s Work Is Driving Me Nuts

“This is a house, not an animal shelter! And this is driving me nuts!”

This was something I said to my wife roughly five weeks into fostering a dog named Georgie. We had taken him in soon after Emily had read an article about what he’d gone through. Left tied to a post in the backyard of an abandoned home with a bullet wound to his shoulder, Georgie was in dire need of food, shelter, love and physical therapy (which he would need to get every week for at least the next five weeks if he wanted to keep his leg). He had come to us from Metro Animal Care And Control emaciated, frightened, and with a front left leg that he dared not place any weight on. It was clear he needed a place to recuperate before finding his “forever” home, so Emily led the charge in ensuring our house would be open to him.

Obviously, this is a wonderful thing. We’re doing God’s work. How could it possibly be driving me nuts? 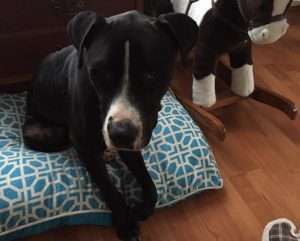 Emily and I are both animal lovers. We both grew up with a myriad of pets, and on top of donating monthly to the ASPCA and other local shelters, we have six pets of our own. Four cats. Two dogs. All of which are rescues or strays in one way or another. Add our three-year-old potty training daughter to the mix and, as they say, chaos ensues.

And that’s before you’ve included the strange foster dog.

Pet-caused chaos doesn’t bother Emily. If she can do something to help an animal in need, she will do so without much extra thought. I admire that in her, however, I tend to be more on the cautious end of the spectrum. Ultimately, my job is to protect my own pets – my family. I’m obligated to look out for them first. Could bringing in a foster damage – among other things – their fragile equilibrium? (And OMG my cats and their fragility… sigh…)

And… well… the chaos thing. Just as an example, I hate cleaning up dog pee. Actually, it’s not so much the cleaning as the concern about what it’s doing to my house. It’s not so bad if it’s on the “hardwood” laminate, but if I don’t see it right away it might have time to get through the cracks, or run under the entertainment center, or into a register. Don’t even get me started on the carpets!

Before Georgie, Sweet Dee (our beagle) was the only culprit. And it would happen enough that every other day I’d do a sweep of the house because I knew I’d find it. With Georgie here, Dee is worse, and for some reason Maeby (our beagle-cavalier mix) has decided to join Georgie in frequent peeing contests.

I have less hair now than when this whole thing started.

So it goes without saying that at some point I would become particularly frazzled about all of this and finally say something stupid. Ergo: “This is a house, not an animal shelter! And this is driving me nuts!”

As you might expect, it did not go over very well. 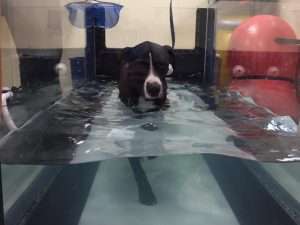 God’s Work Is Challenging… For A Reason

God is very deliberate in the challenges He places in front of us. More often than not they get deep into the core of who we are, and expose something very uncomfortable about ourselves. Those challenges are typically designed for one of two reasons – either to prepare you for something specific down the road, or to get you past something that might hinder you in your quest.

In the case of Georgie, God is forcing me to face something that might hinder me in my quest. He’s challenging me to overcome it. In this case, the quest – very much God’s work – is helping animals in need. I talk a lot about how helping people is one of my main goals in life, but helping animals is pretty high on that list, too. It’s all part of the same, larger dream.

Yet, in the process of trying to help animals, I get easily frustrated by the very act of doing so. If I’m pulling my hair and freaking out over the chaos (as I perceive it) created by bringing in Georgie, how exactly am I to truly be able to do God’s work and help animals? Isn’t it likely that when faced with another opportunity to help, I’ll instead pass because I don’t think I can handle it?

God knows this. That’s specifically why we have Georgie right now. 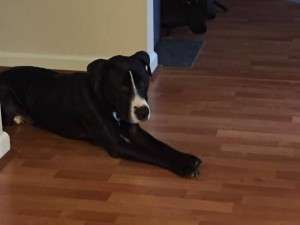 Challenges Are Not The Same For Everyone

Emily was very hurt by what I said, not because I didn’t want to help Georgie or didn’t love animals, but because up to this point she’d been under the impression that I had the same passion for them that she did. And by that I mean the same “what chaos?” passion.

First of all, I don’t think there’s anyone in the world who has the same kind of passion that she does. It’s incredibly difficult to live up to. I don’t think she understands that. It’s truly a beautiful thing. Wouldn’t it be wonderful if we all had that kind of passion to help? The kind that sees no barriers or roadblocks to doing so?

Secondly, just because she can handle six pets, a potty-training three year old and then a foster dog on top of everything else we’re doing doesn’t mean everyone can. It doesn’t mean I can. 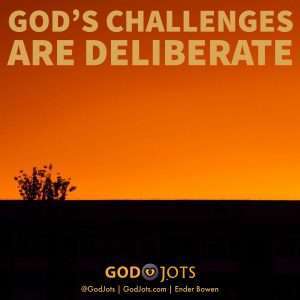 But I’m working on it. That’s the challenge God has set in front of me if I intend to do His work. He put an example right next to me and said “if you want to do this you need to be that“.

I realize this makes me seem shallow. Especially when you consider how trivial this challenge appears. I mean, seriously… I’m freaking out over having to constantly pick up dog pee on my floor when, on a daily basis, third world humanitarian workers face challenges I couldn’t even conceive? I’m pulling my hair out taking care of seven animals while thousands of children and their families try to stay positive in the face of cancer?

What the Hell is wrong with me?!

The thing is, if God’s challenges are deliberate and specific, then the ones we each face are designed specifically for us. As a result, what may not be a challenge for one person might be an absolute struggle for someone else. What comes across as trivial for one may be absolute Hell for another.

Those challenges have been given to each of us for a reason. If we truly want to do God’s work and fulfill the destinies He has for us, we need to take those challenges on, and be grateful for them. 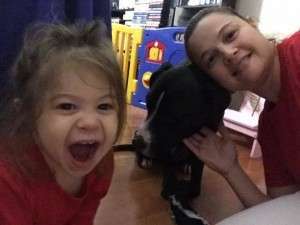 At the time of this writing, we’ve had Georgie six weeks. He goes for his final physical therapy session this evening. All accounts suggest that he will be able to keep his leg, which he’s actually putting some weight onto.

Speaking of weight, he’s gained between 5-10 pounds! He still looks thin, but now his head doesn’t seem twice as big as his body. He plays with the other dogs, he runs in the backyard (though he probably shouldn’t) and he even jumps up to pat us with his front paws when greeting us. This is all a stark contrast to the shy boy who had no idea what to expect from a human being.

Apart from his physical challenges, Georgie’s challenge was to be able to learn to trust again. We can’t possibly know what he went through or what it did to him psychologically. It’s probably worse than anything we can picture. Surely, his challenges made mine look completely ridiculous by comparison. But he faced them. We helped him face them. We shepherded him through those challenges so that someday soon he can permanently love, and be loved, by a whole new family.

And we’re both closer to fulfilling our destinies because of it.