The Truth About Chaos (It’s Not What You Think)

Chaos is not a real thing. It is merely a human perception. Perhaps even a distraction.

March 2011 – An earthquake rattles the Pacific Coast of Tohoku, generating a tsunami that kills thousands, displaces millions and causes 7 meltdowns at 3 of Fukushima’s nuclear reactors. The scene on the ground is considered one of “complete chaos”.

April 2011 – A “super outbreak” of 362 tornadoes rips through the southern, midwestern, and northeastern United States, causing millions of dollars of damage and killing 348 people. The question is asked: “Is this chaos as usual?”

November 2016 – A wildfire breaks out in Gatlinburg, Tennessee, killing over a dozen and either destroying or damaging a countless number of buildings and structures. The mandatory evacuation declared during the overnight crisis is described as a scene of “chaos”.

January 2017 – My wife and I take in a foster dog and, as a result, all of the dogs in the house (including the foster) turn it up a notch and constantly pee on the floor. It gets to the point where we are cleaning up pee three or more times a day. On top of that, my daughter – who is potty training – decides to join in the fun by refusing to tell us when she needs to pee, thus adding to the messes we have to clean up. It’s only a matter of time before I find myself screaming “I can’t deal with this chaos!”

“Chaos” is what we call it when things seem to get out of control or unpredictable. Sometimes we attribute chaos to the things in life that don’t make sense or that we can’t otherwise give meaning to. It can be a term we use to describe a catastrophic event that causes immense human casualties and suffering, or a trivial moment in time where we feel frustrated, stressed and at the end of our rope.

If There Is Chaos, There Is No God

One argument I’ve consistently heard against the existence of God is that if the world and, in fact, the universe, is full of chaos, how can there possibly be a God? God is supposed to be an agent of order. Clearly, the world is not ordered – it’s a mess. How could a God who is supposed to love infinitely and unconditionally allow such terrible and meaningless things to happen?

And if God is supposed to bring personal order and sense to my life, then why do those I love disappear or die needlessly? Why am I constantly stressed, frazzled and feel like I’m about to go crazy? Why can’t I have any sense of order in my own life? How come these dogs are peeing on my floor? Why can’t I hold a job? Why does some random person pull out in front of me and cause an accident that totals my car?

Isn’t God supposed to make all of this easier and meaningful, not random and chaotic?

The problem with chaos is that it’s not a real thing – it’s something we perceive. 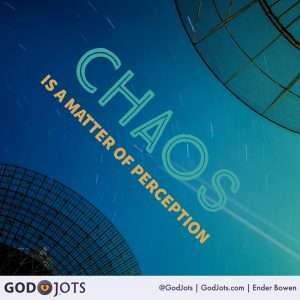 An earthquake occurs and causes a Tsunami that consequently kills thousands of people needlessly, and destroys property in a way that seems random and haphazard. So, of course, we see this as completely chaotic and disorderly. The same with a super outbreak of tornadoes or a wildfire through an amusement town. War, famine, disease – all seen as chaos because there’s no reason – there’s no sense.

And that’s specifically why, even though it may seem insensitive, I included the trivial stress of cleaning dog pee ad nauseam up against the horrors of lost lives. The things that happen in our personal experiences – the things that make no sense, or come out of nowhere – we perceive as proof of a kind of chaos.

But is that really what it is?

The True Meaning Of Chaos

We talk about chaos as, essentially, the things that happen unpredictably, or without reason or sense. You could add “without logic” to that, as well. But we seem to be missing the point that these concepts are human constructs.

So if what we’ve described above does not truly represent the concept of chaos, what does?

March 2011 – An earthquake rattles the Pacific Coast of Tohoku, generating a forest of grape trees in South Carolina. Most of the population of Italy giggles because it tickles a little bit. Three people die, but that’s because they are allergic to earthquakes.

April 2011 – A “super outbreak” of 362 tornadoes sit on the beach and have some margaritas. One of the tornadoes is a wicked golfer. Two are reincarnated rock stars but nobody knows which ones.

November 2016 – A wildfire breaks out in Gatlinburg, Tennessee, allegedly over a disagreement regarding the taste of Prego pasta sauce. The citizens of Gatlinburg thought it tasted okay, whereas the fire could have done without it. Firefighters sword fight the fires to death, and are immediately brought before a jury of talking McDonald’s Big Mac wrappers to be tried for “extinguishing”. There is an outcry at the unfairness of the trial because it’s all to get back at the firefighters for “haphazardly crumpling up and throwing away some of the wrappers’ people once.”

January 2017 – My wife and I attempt to foster a dog, but he immediately banishes our own dogs to another dimension, and pees on our floor, turning it into Play-Doh, which our daughter enjoys. A woman pulls in front of me and, unable to stop in time, I hit her car in the side, immediately turning into a balloon while her car miniaturizes and disappears.

I could keep going.

True chaos truly doesn’t make sense. It follows no rules, no rhyme and no reason. Cause and effect make no sense at all. There are no laws governing the structure and function of the universe.

Still, what I described above manages to follow some kind of structure. Though it’s random what might happen when two cars hit each other, at least we can infer that something occurs. It doesn’t make any sense that Big Mac wrappers would talk or be on a jury but it does make sense that if firefighters have been carelessly throwing out their people, they might have a grievance.

Thus, chaos is a nearly impossible thing for the human mind to fathom. We’ve never truly seen it.

But what we know – in fact, what science has taught us – is that there is a very clear structure of law and order in the universe. We know what gravity is and what it does because it always does what it does. We know how to build cars because the laws behind the engineering of a vehicle don’t change. Sure, we can advance them and make better cars, but the laws governing that stay the same. 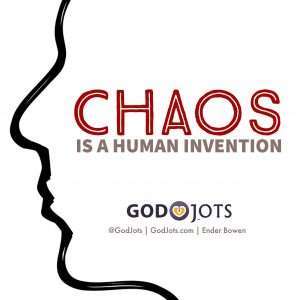 While we are fuzzy on some of the details (and that’s just because we can’t figure them out, not because those details are random), we know why tornadoes occur. We know how and why they can kill people and cause costly damages.

Car accidents happen for a number of reasons. But they are limited to those reasons, whether they are human error or equipment failure or what-have-you.

What seems chaotic to us is really the universe doing what it’s supposed to do. It’s behaving the way that the laws behind it tell it to behave.

It is those laws – the constant of the structure and function of the universe – that tell us there is something (or someone) far more intelligent than a simple human mind behind all of this. This is not “chaos” to Him. This is purpose.

While it is science’s job to tell us how, it is the job of faith to tell us why.

Chaos is not a real thing. It is merely a human perception. Perhaps even a distraction.

And it is that very fact that tells us there is something more – something with meaning and purpose.