Justice – The Error In Judging With Our Hearts

The only way true Justice can be levied is through Compassion and unconditional Love – not just to one side but to all sides and to all people.

Back in the Fall of 2005 I was in my second year working at an outsource call center in Potsdam, NY, nursing the wounds of a relationship that had just ended, and having just moved into an apartment with my brother and a friend. We were experiencing high turnover at work and were bringing on some new hires. As it turned out, one of them was a former acquaintance of mine from my high school days. I wouldn’t have considered us friends back then. He was a bit of a troublemaker and I hadn’t been interested in trouble. But within a few weeks of his tenure at the call center, he and I were already going out to bars and hanging out at each others’ places.

We weren’t becoming incredibly close or anything like that. I was at a time in my life where I needed to enjoy things and not put so much thought into the consequences. And, compared to staying in, going out was a much better way of keeping my mind off of the girl I’d recently lost. Hanging out with this guy was just something different; something I needed. I’d never really had any kind of true teenage rebellion. So, at 25, I decided to just let loose a bit and see what it was like.

That being said, we weren’t really getting into trouble. We weren’t even trying to. It was just fun to hang out with someone who knew the ropes and could get me back out into the world. I wasn’t interested in doing that alone, really. I didn’t know how.

But despite the lack of true debauchery, there was always a dark cloud hanging over my friend. Word was that he had gone through juvy, had done some jail time and was a bit of a wild card. Deep down I knew the stories were probably true, but I ignored them – I was having too much fun.

Then, one day, I came into work and was told by my boss that my friend had been arrested for breaking into a police sergeant’s house, allegedly looking for a gun or something else that either belonged to him or belonged to the sergeant. The story goes that the two knew each other, and my friend was looking to either blackmail the sergeant or put him out of commission.

While this seemed completely nonsensical, I somehow wasn’t entirely surprised. I couldn’t (and still can’t) explain it. It was just a feeling.

I knew I had to break all ties.

So when my friend called me up one day and left a voicemail stating that he didn’t do any of those things and that he was being framed, I ignored it. Based on his history and the stuff I was hearing about this latest arrest from others, I wanted to get myself as far away from an association with him as I could.

And I never spoke to him again.

Judging With My Heart

To this day, I still don’t know if that was the right thing to do. I don’t know what happened to him, so I don’t know if he really was someone I should have stayed away from, or if he was really being framed (though I highly doubt the latter). 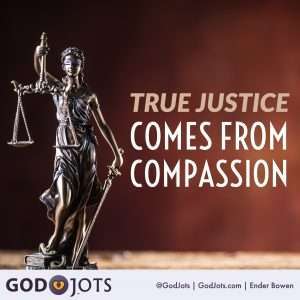 What I do know is that for some reason I was eager to convict him in my heart. I think, somewhere deep down, I was always convinced that he was real trouble. I suppose that was part of the reason I was hanging out with him at the time, after all. He was not someone I should be spending my time with, so when the opportunity came, I cut ties.

I more or less considered him guilty without taking any actual evidence into consideration.

And this is exactly what I see happening more and more today. We become highly emotionally attached to an issue and thereby seek what we believe to be “justice” without even considering the evidence or the circumstance. We denounce outcomes as “justice not being served” if they don’t go the way we think they should, and celebrate “true justice” if they do.

All based entirely on our feelings.

Feelings: Why Justice Is Blind

This is why “Justice is blind”. If it could see, it could form a bias; it could play favorites; it could emotionally attach itself to one party or the other, lending that party an advantage. “Justice is blind” because the only way fair Justice can be measured in human terms is with logic and facts. Nothing else. 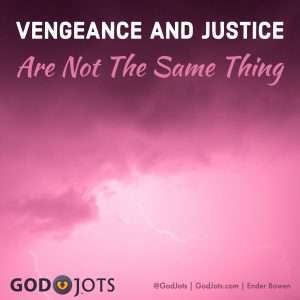 In order for human beings to dispense Justice, we must entirely detach emotionally from the people we are dispensing that Justice to.

That seems rather bleak, doesn’t it?

But maybe it doesn’t have to be. After all, if the issue is about fairness, and “Justice is blind” because all emotion and preconception has to be removed from the equation, what would happen if we did the absolute opposite? In other words, what if, rather than not invest emotions into anyone, we do invest our emotions into everyone?

If we Loved everyone equally, and were Compassionate toward everyone in the same way, couldn’t we also then dispense fair Justice?

We could, and in fact it would be a better form of Justice – a true Justice – but while we have the capability for this kind of Love and Compassion, it is almost entirely against our nature.

And yet, there is someone whose nature is comprised of nothing but Love and Compassion.

The Ingredients Of True Justice

The only way true Justice can be levied is through Compassion and unconditional Love. Not just to one side but to all sides and to all people. 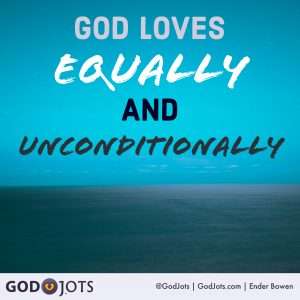 God is the only being capable of handling that concept and everything it entails.

The only way people can be truly and fairly Judged is by equal, unconditional Love.

The only way measured sentences can be given is through Compassion.

The easiest way to understand it is to look at your kids. One may do something to the other, but because you love them equally, your judgment is fair; because you are compassionate, your sentencing is measured.

But where you differ from God is in how you would judge a situation that involved your child and someone else entirely.

Justice is blind because, for us mere humans, it has to be. Otherwise, we end up convicting people based on nothing more than how we feel about them or the situation.

That doesn’t mean our Justice system is perfect – it can’t be. It’s run by humans! Sometimes it’s not going to work.

The only way it can work is for us to detach emotionally, and to look at the facts. No bias or favoritism. No demonizing or politicizing.

Perhaps, if we would stop for a moment and, rather than jump to conclusions, really take all the facts into account, we’d be surprised at what we find.

I’m curious to see if it’s Love and Compassion, after all.