Why It’s Important to Listen and Be Humble

Are You Asking For Help Or Looking For Affirmation? If you stop, listen, and be Humble, you’ll soon understand the difference.

…Then A Curious Thing Happened…

When the 2016 NHL All-Star Game was announced last year as being here in Nashville, my wife Emily and I were ecstatic. We’re huge hockey fans, both having more or less grown up on the sport. We were excited about the idea that we would get to see all the best players in the game and to take part in the experience of the whole hockey world coming to little old Nashville. But as All Star Weekend came closer and closer, it became more and more apparent that we weren’t going to get to go to the game. We would be lucky if we would get to take part in any of the events happening down town.

Needless to say, we were both fairly disappointed.

Then a curious thing happened: we were each hired to work production jobs downtown on All Star Weekend. More than that, each job had a tie-in with the NHL and the weekend itself. We were going to get to experience All-Star Weekend in some capacity after all!

In Emily’s case, she worked with a behind-the-scenes NHL Network crew on Friday and Saturday. At one point she was on the same set I was working. She actually got to see the Stanley Cup in person! I worked a commercial tie-in for Enterprise: a series of interviews with All-Star goalies at the Hilton on Thursday, and a game-show promotion in front of Bridgestone Arena on Friday. Each featured Kevin Weekes, an NHL Network personality (who is fantastically talented and a very kind human being).

It was on Friday that I realized I have some things to work on. Not just as a member of a production crew, but as a person as well.

Being Humble: Something To Work On

I’m not great at taking orders. I’m much better at giving them. I don’t mean that I’m entitled or that I feel I don’t need to take orders from anyone. Nor do I mean that I fight every order I’m given. Much the opposite – I want to take orders that I’m given. I want to perform them properly and I want to do what is asked of me per the job I’ve been assigned. But for some reason it’s difficult for me. 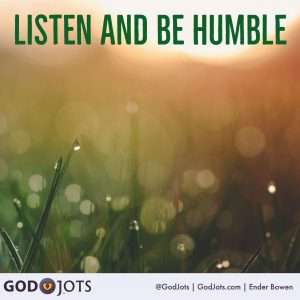 There’s an honest explanation for this. Typically, I’m in a position where I’m the one giving orders or making the plans and ensuring that they get implemented. I’m much more of a “big picture” person. I function better when I not only see the end-game but where all the pieces are. I like to see where they fit and what they do. When I’m simply one of those pieces and I don’t have that whole picture in front of me, I tend to operate very much in a sort of confused state. As if I need to know what my purpose is before I can actually do what I’m being asked. I start to overthink and then miss the obvious stuff.

Locking Up And Listening

For instance, during much of Friday’s production I was “locking up” the entrance to the set while the crew set up lights and prepared the shots. The act of “locking up” essentially means ensuring that no one gets past a certain point, thus either impeding the crew’s work, creating a safety issue for themselves or, once shooting has started, ruining the shot by blocking a light or appearing in the shot itself. It is very much akin to acting like a security guard.

In any event, I had been doing this through much of the day and apart from people who had clearance to do so, and other VIP’s that I personally walked through the set to their destination (in order to ensure their safety), I had not let anyone through. Then, about a few hours into it, a young lady walked by me and, when I tried to stop her, she moved even faster, clearly trying to get to the safety of the crew as if I was trying to assault her. As she took off, one of the crew informed me she was actually one of the extras, so it was okay. So I turned around and went back to the entrance to continue locking up.

No sooner had I done so than the First Assistant Director (the person in charge of the set – my boss) approached me to explain how to properly lock up the set. Now, I just want to be clear – I like this A.D. He’s very good, knows what he’s doing and is on top of everything. He’s a great resource to learn from and I admire how well he does his job. That might explain why, when he gave me a set of suggestions and recommendations on how to keep people out of the set, rather than simply say “copy” (and this wasn’t the first, nor would it be the last, time I hadn’t done so) I noted that the young lady was an extra and that I had been doing this all day with no problems.

He didn’t like that. I don’t blame him. And while I can explain why I did it, it’s still no excuse. I should have just accepted the feedback and said “copy”.

The problem is that – perhaps because I admire him as much as I do and want to perform well for him – I was far more concerned with his approval rather than just doing what he wanted me to do. I wanted him to know I had already been doing this, and doing it well, before this one extra had gotten by me. I wanted an affirmation that I wasn’t a complete failure. And I wanted him to know I didn’t suck at my appointed task. It’s just that one person had gotten through (and technically she was supposed to). She just happened to be the one he saw.

Pride Gets In The Way Of Being Humble

This is a perfect example of Pride getting in the way. All I had to do was listen, be Humble, take my orders and move on. Instead, I tried to argue the point. Who or what did that really help? 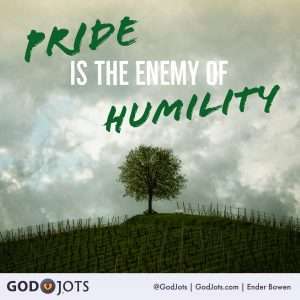 But this isn’t just something I find myself having trouble with in my daily life. Indeed, once I was able to observe the above with some objective distance, I realized that this is exactly the problem I have been having in my relationship with God.

I bet you might even be having the same problem.

Is it possible that God did indeed respond but you ignored Him? Is it possible you blocked Him out because either you didn’t like what you heard or because it’s not what you thought the answer would be?

When you speak to God, are you asking for help or are you actually looking for affirmation? Do you want to do things the way God wants you to do them? Or do you just want God to approve of what you’re already doing? 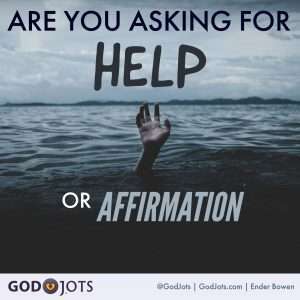 There’s quite a big difference there. And while I always realized that to be the case, I hadn’t thought so deeply about how I might be missing cues or suggestions from God because perhaps when I say I need guidance, what I’m really saying is “approve of what I’m doing”. When I ask for help about making a decision, rather than looking for the right answer, maybe what I’m actually saying is “approve of the decision I’ve already made”.

Being Humble is not an easy thing. Pride likes to get in the way. It likes to make us believe that we already know all the answers. All we need is an affirmation from others. But only by being Humble can we truly listen. Not just to God but to other people in our lives – those we love and those we trust. Heck, even strangers.

It looks like I have some work to do. And I’m happy to do it.