How Comparing Yourself to Others Can Lead to Disaster

Spending our lives comparing ourselves to other people leads us down a dark road where we don’t actually live our lives or invest in what we already have.

Comparing Myself To U2’s Bono

Being a huge U2 fan, and a wannabe rock star, it seems entirely logical that once I started into my 20s, I began comparing where I was in my career to where Bono had been with his, at the same age. U2’s first album came out when Bono was 20 so, naturally, it made sense to track how my career was going from there forward.

Let’s see how that track went…

At 20, Bono and co. released their debut album Boy. I was still in college and working on my first album.

At 21, U2 released their second effort, October. I released my first album, Neon Apocalypse.

At 23, U2 released their third album War. It contained a hit single in “New Years Day” and one of their most popular anthems, “Sunday Bloody Sunday“. I released my second album, Scarlet Dawn.

So far this is sounding really good because I’m only one album behind right? Sure… but then the work of comparing myself to Bono starts to take a dark turn. When you consider that at 23 I’d played no live gigs (though I’d formed a new band called Starways Congress) and the above releases were definitely not on major labels… It doesn’t look that great anymore. In fact, at that time, no one really knew I existed. That’s terrible!

And this is where the train of thought – this comparing effort – gets really dangerous. Because if I follow the track I’m on I eventually get to now, when I’m 35. I’m currently working on my fourth official album (after quite a hiatus) and I still haven’t played any live gigs.

By the point Bono was 35, he’d conquered the world, released two mega-hit albums (The Joshua Tree and Achtung Baby) and had staged one of the most incredible rock tours of all time in ZooTV.

I’m… erm… still working on it.

A few years back, my brother happened to ask me if I was jealous of Grace Potter and The Nocturnals. This may seem a ridiculous question on the surface but the truth is it’s not. Grace went to St. Lawrence University right after I graduated from there. Her husband and drummer, Matt Burr, was someone I played music with (albeit briefly and mainly as part of an ensemble… but it counts). My brother knew I was the one who wanted to break out of there and be super famous. Instead, I’m not and Grace is. So it’s not a stupid thing to wonder if I’m jealous. I told him that I wasn’t. And I was being honest.

See, it’s hard not to be at least a little bit jealous of someone who has something you want. It’s completely understandable actually. No matter how hard you fight it, it’s there kicking your head. This is something you’ve always wanted. Why don’t you have it? Why does someone else have it?

And why haven’t I ever signed a true record deal and released a single by 35, while Bono had pretty much beaten me by age 18?

A Dangerous Line Of Thought

This comparing of lives is a dangerous and poisonous line of thought, folks. Jealousy is a vice (or a sin, if you’d like to call it that) for a reason. It causes you to think entirely emotionally, focusing completely on a variable that in truth has nothing to do with you. Sure, in the tiniest amount, there’s an argument to be made for jealousy lighting a fire under your ass motivating you. But that’s as far as it should ever go, if it should even go there at all. 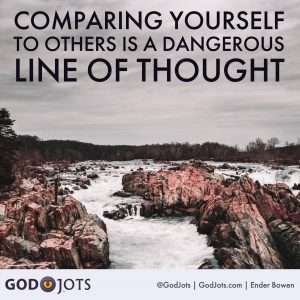 I think this, too, is so much a part of what fuels today’s “Me Culture” (or “Me, Too, Culture”, depending on who you talk to). We’re so much more concerned with what other people have – what we are absolutely convinced we can’t live without – that we forget to look at what we already have. I’m not talking about simple rights. I’m talking about this urge to have the nice car or the nice house that Johnny or Amanda down the street have and thereby completely forgetting how nice our own car and house are because we have them. We’re so preoccupied by the affluent lives some people were born into that we forget that even though we may not appear to have that much, we have more than we could ever know or truly understand.

I’ve heard people talk before about how they don’t believe in a God because they don’t understand how some people can be born with everything and others born with nothing. How is that fair?

Well, I have to tell you, it’s never been about fair. It’s about something beyond that.

Doing Something With What We Are Given

In Matthew 25:14-30, Jesus tells a parable about three servants. Maybe you’ve heard it before. If you haven’t, here’s the link. Give it a read. In this parable essentially a man entrusts his three servants with his fortune (described simply as bags of silver) while he leaves on a trip. Two of those servants, rather than sitting on them, invest them and, in doing so, earn from the investments. The third servant simply buries the money and does nothing with it. As a result, nothing changes. The two servants who invested the money are rewarded in abundance, while the money that the third servant was given is taken from him and given to one of the other servants.

While I’ve never really needed the above parable to come to this conclusion (and while I understand it has many different meanings) I believe that the reason we are all born into different stations in life is not because God is unfair or because there is no God. It’s because we are tasked with doing something with what we’re given. Some of us are given much to work with (but in doing so are given so much more responsibility) while others aren’t given much at all (because that’s all we need to begin God’s work).

You were born in a mansion with lots of money? Great, so what are you doing with it? Are you giving to the community or a charity? Do you plan to create a business and hire people? Are you using your influence to help those less fortunate? Are you using this affluence to do something completely outside the box and new? Or are you pissing it all away or using your power to hurt or destroy others?

You were born in dirt and live in a box? What are you doing with that dirt and box? Are you spending most of your time lamenting why that’s all you have or are you using what you have at your disposal to rise above and in the process lift those around you? You may think I’m speaking nonsense… but that’s the problem isn’t it?

These are the challenges we are given. This is the work that God has tasked us with, fundamentally. Each one of us has been sent on a mission to do something with what little bit or mega amount that we have – and to utilize our God-given talents to realize them. And by lifting ourselves, we lift others.

The challenge may seem great, but as I always say, God doesn’t give us anything He knows we can’t handle.

Rejoice In The Uniqueness Of Your Journey

Spending our lives comparing ourselves to other people – whether it’s because they have what we want or because they’ve done the things we want to do – leads us down a dark road where we don’t actually live our lives or take stock of and – existentially – invest what we already have. We forget who we are and, beyond that, what we’ve done or what we’ve accomplished.

If I spent my life constantly comparing myself to others like Bono or Grace Potter I’d never find any worth in the things I’ve accomplished. But when I stop and take a look and really list it all out, I find some of it really remarkable.

I’ve written, recorded and released over 60 songs; I have put out several albums; I’ve been to Trinidad and Tobago; I challenged my fears and moved to Nashville; I married and had a child; I’ve created music with some incredibly talented musicians; I have taught myself to play guitar and video edit and record and mix music; I’ve conquered my stage fright (sort of) and have learned to actually sing in front of people… the list goes on.

Your list would, too, if you’d write it down.

But it doesn’t end at the list. It just begins there. Now that you have that list, what are you doing with it?