How I Found Faith In The Face of Fact

God knew my analytical mind. He knew that my brain and my belief system worked largely upon logic, which made Faith a hard thing to grasp.

When I was in college, I took a couple of religious studies classes. The first – Introduction to Religious Studies – mainly presented all the different religions, including many that are long gone. The second focused specifically on The New Testament, looking at it from a purely academic angle. We got into everything from the common sources for the Synoptic Gospels to the pseudepigraphical nature of some of Paul’s epistles.

One of the things we talked about in class was the idea that as Christianity grew and became canonized, many of its celebrations were based upon pagan rituals. Christmas came from Saturnalia, including Christmas Trees from the Asheira Cult. Easter came from Eastre, including the goddess Eastre’s earthly symbol of the rabbit – a sign of fertility. The purpose of introducing these ideas into the class was to show that, by including these concepts, Christianity might have been dubious in some of its intentions.

Now, to be fair, this was meant to be an academic study of the Bible and Christianity. So it’s entirely reasonable that nearly everything in-and-outside of the Book would be taken with a huge grain of salt.

But, to me, that didn’t have to mean the intent behind any of these Christian appropriations was false. It didn’t mean there wasn’t any truth in it.

Strangely enough, in a class that found most of its students reveling in what they saw as the fiction of Faith, I found an altogether different kind of Joy.

I found the essence of Faith itself.

The Essence Of Faith

Here I was with the Bible laid out before me. I could see all its bruises, contradictions, academic discoveries, histories and unverified accounts. Yet rather than turn around and throw God out the window, I found myself appreciating the concept of Faith itself more than I ever had before.

This whole time, that was the door that needed to be opened.

God knew my analytical mind. He knew that my brain and my belief system worked largely upon logic, which made Faith a hard thing to grasp. He knew that in order to understand and appreciate Him, I needed to understand the essence of Faith. And the only way to do that was to present me with its complete opposite. In doing so, the stark contrast made Faith – and what constitutes it – very clear.

It also made it a very respectable thing, particularly in the face of the evidence this class presented. I didn’t deny that evidence – God knew I wouldn’t – but that was also kind of the point. I was beginning to choose something beyond it. Even to this day, I balance a logical, academic and historical approach to the Bible with my now-defined Faith in God. I often like to discuss Bible passages within the context of historical facts.

To me, that’s where the real meaning appears. And that’s a beautiful thing!

God Knows You Better Than You Know Yourself

God knows me. He knows how my mind works and what it latches to. He knows how to draw me in. And He knows what resources and environments to use. Even those that might initially appear to be in the realm of His antithesis. Even back then, this wasn’t entirely lost on me. 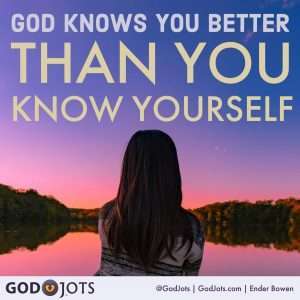 Believe it or not, I absolutely loved this class, as it was the first real time in my life that I’d studied the Bible in any kind of way. And in doing so, somehow, I found a whole new respect for the Book, its meanings, its symbolism and its intent. There were many things that were gradually pushing me toward my acceptance of God (and Christ, specifically), but this class would find itself near the top of that list.

And I love that something that should have pushed me away from God actually pulled me closer to Him.

Just as God knows you more than you know yourself, He knows others more than they know themselves. He wants us all closer to Him. He wants us all to know Him. Pagans were not excluded from that. How do you think He pulled so many of them in?

Time To Faith The Facts

A lot of times, as Christians, we run into situations where we have a hard time explaining what the heck it is we’re doing or why we’re doing it, particularly during Christmas or Easter – festivals that are not purely Christian in origin and in fact largely appropriate from other, decidedly non-Christian concepts. We may feel so hard-pressed to reason that we might actually ignore the academic and historical truths behind them. Maybe we’re uncomfortable with them. Maybe we just want to pretend that they aren’t truths, after all, and go about our business.

But I recommend this: don’t ignore them. In fact, look into them. Learn about them. Don’t be afraid of them. Appreciate them, even.