The more we simply attack those that disagree, the longer we go without putting true, positive change into the world. And that world is shared by all of us.

The below image was sent to me this past week. Please take a moment to look at it (clicking it should open a pop up so you can read the whole thing).

This was apparently posted on the Daily Kos Facebook with the caption “Says It All”. I was disheartened when I saw the image, but you may be surprised as to why.

You may also be surprised to learn that I’m not going to defend the person that’s being attacked here.

Because that person doesn’t exist.

I’m bringing this image before you today not because I’m looking to take sides or to argue a platform in a debate. I’m showing you this because it’s an example of what we’re doing to each other.

We’re inventing our enemies. By doing so we’re compromising our ability to effect positive change.

And this is a very, very dangerous thing.

Our culture is becoming largely narcissistic. Perhaps it has always been that way, and the internet – and in particular social media – has exacerbated the problem and/or made it more obvious. As a result, we are sabotaging positive change.

In this image, one person (let’s say it’s “Andy”, since that’s the wall it’s posted on – though for clarification I’m not necessarily attributing the post origination to him) appears to be intellectually questioning the position of another person with whom he clearly disagrees, painting his opponent in a rather unintellectual light. In doing so, Andy effectively presents the other side as nothing more than a bunch of idiots, unable to mount a reasonable or logical defense against what appear to be practical and fair questions.

And, clearly, he wins the argument.

This is what we’re doing. It may have started a long time ago – I don’t know for certain – but in any event we have exponentially declined into shouting at each other to the point that we no longer listen. We take the people with whom we disagree – whether on one point or many points – and rather than debate the issue and look for real answers, we degrade them to the point where they are no longer a threat and put them off to the side. We put them in a box, close the lid, and ignore.

How can we produce positive change when we’re doing this?

We’re not interested in listening – we just want to shout and shout and scream because we want to be heard. And in the end it’s just like shouting at a brick wall.

There’s a reason why it’s called a Facebook “wall”.

Being Part Of The Problem

We’ve each become so proud of ourselves for being either the only person who has the answer or part of the group that does. And I’m not going to sit here and say that isn’t me – after all, by publishing this very post am I not suggesting that I might have, if not the whole answer, part of it? The difference is that I’m not here to shout at you and walk away – I’m here to be part of the solution, not the problem.

“Part of the problem” is exactly what images like the above are. They don’t solve anything. In fact, I would be surprised if that was even the intention. All they really seek to do is degrade, diminish and destroy.

A valid point can be made that the above is merely representative of the kinds of people who think these kinds of things. But I just want to point out:

Because you’re no longer yourself – you’re a representation of what the other side resents.

And when that happens, you’re nothing more than a Bigoted Conservative or a Hippy Liberal or a Capitalist Pig or a Dirty Communist. Because, let’s be clear, all sides of nearly any argument are guilty of this kind of hate speech.

And make no mistake – it is hate speech.

Compassion For The Other Side Of The Argument

The way I understand my faith tells me that no matter what side of an argument I fall on, no matter my opinion, not only do I not have all the answers but I need to be compassionate about the people with whom I disagree. And if I don’t have all the answers then it’s highly likely that someone else has a couple or more. Even if they don’t, is their opinion not valid? Have they not been informed by an experience? Could that experience not inform me in my own understanding of the problems we face today and perhaps help me find clues to how to solve them? 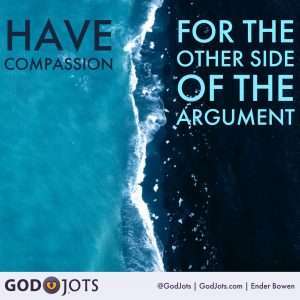 The more we shout, the more we struggle to be heard, and the more we believe ourselves to ultimately be right, the less we’re listening. The more we listen the more we might find that even if we don’t have a whole heck of a lot in common with the person with whom we disagree, we might at least know why they disagree. I mean, truly – beyond “well because they’re a bigot” or “because Obama” or “because Trump” or “I like french fries.”

And, look, to an extent I get it – trying to understand someone else is time-consuming. It’s hard work. It’s definitely not the easy thing to do.

But let me suggest this: is part of the reason for shouting in a desperate plea to be heard nothing more than a cry for attention, or is it that you truly do want to help; that you do want to make a positive difference in this world? If it’s the latter, then apply the idea that if you want to be heard, it’s highly likely someone else does too. And if you want to be treated fairly, if you want your opinions and your arguments to be considered, then it is only fair to do the same for someone else.

Be A Force For Good 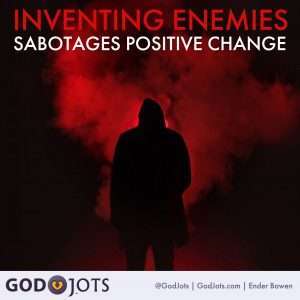 So let’s figure this out together.