When A Blessing Appears To Be A Curse

I think sometimes blessings will come to you wearing disguises; they’ll come at you sideways and feel less like a blessing than a curse.

The last couple weeks would appear – on the surface – to be anything but a blessing.

As you may recall, I spent a good portion of the Fall and Winter editing a feature documentary. My job was to cut up all the interviews into a piece that told a story and had a flow. Once I got through that, the project was passed off to the next person who would handle dropping the B Roll in the right places and adding music.

As it turns out, however, that next person failed to complete the work in a timely manner. He didn’t create something that the producer really even wanted, either. In fact, he ended up cutting the 72 minute piece that I’d edited down to something closer to 45.

That’s why, roughly three Wednesdays ago, I received a call from the Producer asking me to take the project back. He wanted me do what the other person should have done. But in the span of about two weeks. I agreed – I needed the money and liked the producer and the project itself. And I wanted to be able to facilitate it through to the end.

But in order to do so, I’d need to ensure that Addie could go to her normal baby sitter for the full two weeks of the editing so that I would be able to focus on getting it done. For that, I requested a partial payment up front to cover it, and it was granted. All the ducks were lined up and I was set to get started that following Monday.

Or so I thought.

Early Sunday afternoon we received word that there was a family emergency in the babysitter’s family. As a result, she would not be able to watch Addie throughout at least the first week (potentially even both of them). Emily and I (but mostly Emily) pulled some rabbits out of our hats and were somehow able to find friends and family that would be able to watch Addison three out of the five days.

That, we resolved, was better than nothing.

Even so, I nearly had a panic attack. How was I going to get this project done in two weeks when two of the days I needed were going to be a wash? I hadn’t even looked at the B Roll, and I really didn’t have a lot of familiarity with the music. Apart from the fact that I had done all the cutting up to that point, I’d be going in blind.

But, oh! It gets better!

For some time now I’ve been looking for a full time job. On Tuesday I received a call that not only was I hired for a new job but because I had appeared to be free and they needed me, they wanted me to start the following day. I agreed and wondered to myself how the heck I was going to get this edit done while working a full time job!

That night I did a lot of praying. In the course of doing so I was presented with a couple of reminders, and somewhat of an epiphany. Of the reminders: God doesn’t give you anything you can’t handle; there is a finish line, and you will cross it.

The epiphany was a little more difficult to grasp but I think I got it. We had needed for me to get a job and make some money. And I have been wanting to continue to develop my editing skills and in general be a part of the film/video production world. I was granted these things – each a blessing, if you will. The problem was they both came at nearly the same time, almost in opposition to each other and coincidentally when we seemed least capable of handling them. But that didn’t change the fact that they were blessings. They may not have looked or felt as such, but they were. By simply taking a step back, relaxing and letting the worry and the stress dissipate, I was able to see that.

As a result, I’ve as of this writing nearly finished the edit (a few days past the due date but mainly because it turned out we needed more B Roll), I’m still working at the new job and Addie is at her babysitter’s. I’m still alive, not nearly as stressed as I thought I’d be. And we’re in a much better position financially, mentally, and emotionally than we were before all of this came at us.

A Blessing Can Come In Disguise 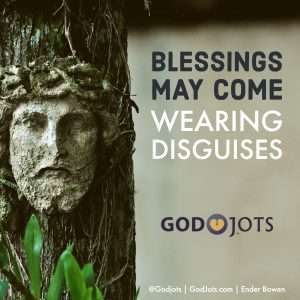 The experience has taught me something new about the concept of blessings. We think they will come and – because they are blessings – make us feel good immediately. Or resolve something that needed resolving right away. We may even think that the surface of them is bright and shiny and good.

But now I don’t believe that to always be the case. I think sometimes blessings will come to you wearing disguises; they’ll come at you sideways and feel less like a blessing than a curse.

That’s why we must be always aware, always prepared, and capable of seeing that which is behind or below the surface, lest we otherwise miss out on God’s gifts altogether.