Compassion’s Place In An Offended World

Compassion compels us to open our ears and our hearts no matter what side we are on. That means it isn’t just the offender that should be compassionate, it’s the offended that should be, too.

I had an interesting Facebook discussion with a friend of mine this past week. It all started with a post where my friend said he was at the doctor’s, the doctor poked him, and in response my friend shouted “Jesus Christ!”, which is his natural, go-to reaction for sudden pain. (That, unfortunately, is also one of my oft-used surprise reactions). According to my friend, the doctor responded with, “I’m a Christian and I’m offended by that. Please don’t say it.” Later on, my friend sneezed and the doctor said “God Bless You,” to which my friend responded with, “I’m an atheist and I’m offended by that! Please don’t say it.”

But I didn’t think that was good form, and I said so, particularly considering that the story was being told with the intent to play “gotcha”, and essentially claim a victory for atheists everywhere by making the Christian doctor seem like a fool, as if his taking offense to something didn’t count because he was a Christian. As is natural on social media, even among friends, we had it out for a bit over that. My wife admonished me for getting involved in political discussions on Facebook – something I know better than to do.

Best saved for this, I suppose.

Truthfully, though, my objection to the post wasn’t so much about politics, or Christian vs. Atheist – if this were flipped around where the atheist was offended first, I wouldn’t defend the Christian’s “gotcha” retaliation either – my objection came from a standpoint of “hey, where’s the Compassion?”

The End Of The Conversation?

Another friend of mine posted on Facebook the week prior, stating that if you have no problem offending people – if you don’t consider the feelings of those who say that you’ve offended them and otherwise suggest that the offended party should suck it up and “be a man” – then you’re part of the problem. On the surface, this would appear to be proper etiquette, however, it’s still missing something.

In the case of the first friend, it didn’t appear any Compassion was applied to the situation (by either party).

In the case of my second friend, the implication is that when you have offended someone, you must acknowledge and – likely – apologize for the offense (something the first friend didn’t do).

But neither of these cases appeared to understand that when someone claims to have taken offense, that isn’t the end of the conversation – it’s the beginning.

And that’s because Compassion works both ways.

A quick little history lesson about myself and this site – I had felt God pushing me in the direction of talking about this subject matter for a long time, but I kept refusing to do it because I was afraid that even though I believe myself to be a rather fair and compassionate individual, someone was still going to take offense to something I would say.

But the last thing I’d ever want to do is offend someone. What I want to do is bring people Joy and show them ways they can do that.

Nonetheless, when you speak about something like religion, or even just spiritual influence, you have to be prepared that someone is bound to be insulted by your words. No matter what you do, and no matter how you try to deliver your message, there will always be people who will take it the wrong way.

What Compassion Compels Us To Do

In the first friend scenario, when the doctor claimed to have taken offense to my friend’s sudden shout of “Jesus Christ”, rather than strike back, my friend should have apologized for the offense, even though there was no intent to offend. In fact, he could have added that he hadn’t intended to offend – it was just something that he had a habit of doing.

Which is exactly what my second friend probably would have recommended, if we are to follow what he posted.

That’s also where my second friend would have likely let the issue end. One person says or does something, another claims offense, and the first apologizes. End of story.

But that’s not the end of the story.

Compassion compels us to open our ears and our hearts no matter what side we are on. That means it isn’t just the offender that should be compassionate, it’s the offended that should be, too.

I know that may not be a popular thing to say, but the truth is that probably 90% of people who offend you have no intention of doing so – they just walk into an unfortunate turn of phrase, or don’t know their audience, or come from someplace that thinks a little differently. That doesn’t mean they’re bad people and that doesn’t mean they’re out to hurt you.

They deserve the same kind of consideration and Compassion that you, as the offended, ask from them. Why?

Because they’re human beings, too.

That doesn’t mean you’re letting them off the hook. And it doesn’t mean they’re simply allowed to get away with it. It just means open your heart and have the patience to look at the intent, rather than the allegedly-offensive act itself.

Taking Offense Is Where The Conversation Should Start 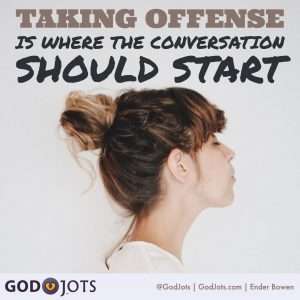 In the above scenario, after my friend apologized, the doctor could have said something along the lines of “I understand, I’ll try not to poke you so hard,” or “that’s alright, it happens,” or any other number of things. He could have even started up a conversation that asked why “Jesus Christ” was my friend’s go-to – not as an accusation but as a curiosity; as something to learn.

I realize this sounds like pie-in-the-sky nonsense. People just don’t do this kind of thing. And you’re right – we get pricked, we react.

But it doesn’t have to be that way.

I’d like to think that if I offended someone with my work, then that person would say so. Whether personally through a private message or even on a comment (spoiler alert: they have). And when I apologized and explained the intent behind it (particularly that I wasn’t trying to offend), that would get a conversation rolling where we could talk about why it was offensive to them, as well as why I didn’t think it would be.

Believe it or not, I actually look forward to conversations like that.

How have you handled circumstances where either you’ve been offended or you’ve offended someone else? Looking back at it, do you know how you could have handled it better, regardless which side you were on? Share below!