I am a bit bothered by what we are seeing with the Confederate Flag backlash.

Before I say anything, as a disclaimer, let me clarify my stance:

I don’t think it belongs on any government property. Not even (and maybe particularly) the property of states that were once part of the Confederacy. It is, in part, representative of a rebellion against our own government. Treason. So, I don’t think it should be hoisted on any flagpoles on state grounds. It’s just in poor taste, if you think about it. To me, that’s pretty cut and dry.

I recognize this flag as representative of states rights during an incredibly trying time in our nation’s history. And I recognize that regardless of the implications of the right to own slaves, people fought and died for this belief, and that many of their descendants (and others) have a strong connection to this belief (particularly in the times we live in), wholly separated from the concept of slave ownership or white supremacy. Don’t forget that the people who fought and died were still Americans – our brothers.

I recognize that this flag has been used as a symbol of hate, particularly by white supremacists. I get that there are many people out there who are offended by it, and I completely understand and don’t argue the point – depending on who they are and their experience with it currently, historically or contextually, they probably should be offended by it.

But that’s where things get dicey.

Looking For The Meaning

Though I completely understand why someone would be offended by it (it has that associative history, after all), does that mean everyone who flies it or puts it on their car or their porch is a white supremacist? Is it okay when you’re offended to, essentially, offend someone else as a means of “fixing” it? Because that’s what you’re doing, even if what you think you’re doing is right. You’re offending those who have a genuine, peaceful association with this symbol by removing it from everything (not just government grounds), which implies that it’s horrible no matter where it is.

I also find it terribly troubling that when someone says something like “well it’s the Confederate Flag and I feel an affinity to it” that immediately there is a “well you are ignorant because actually this was never the flag of the Confederacy, it was the battle flag of northern Virginia” and so on (though it did appear in further iterations of the Confederacy’s flag). None of that historical accuracy matters once someone makes a particular connection that has meaning to them. So what if the reason they’re attaching themselves to it isn’t historically accurate – does that negate what they feel about it? No. Does that make what they feel about it any less genuine? No. It’s a silly argument.

And you can twist my point on its head and say “well… but you’re also affirming someone’s feeling about being offended by it.” Indeed, I am. That’s the point. It can have many meanings. It depends on who you talk to.

Talk To Each Other

“Okay then, Ender, what would you have us all do? Clearly this flag offends people. But you’re arguing that we shouldn’t just pull it down and erase it everywhere because it has a meaning apart from that for others. So what do we do?”

Talk. Seriously. Not everyone who flies one of these flags is a racist or a white supremacist, and not everyone who wants to take it down thinks it’s necessarily a symbol of racism. If you’re offended by it, ask questions of the person flying it. If someone is offended by you flying the flag, ask them why. It’s okay if you still disagree. It’s okay if you still don’t see eye to eye. Have that dialogue. Otherwise all we’re doing is perpetuating the cycle of hate and ignorance.

We live in a society now that is so lazy, it has no interest in talking to people with whom they might have a quarrel. No one wants to actually get to know each other, they just want to assume the worst of someone. You’re flying the Confederate Flag? Must be a racist. You’re a Christian? You must wish for me to burn in Hell. You watch Celebrity Apprentice? Then you must hate Mexicans.

There are many things my faith has taught me but above them all, it’s Compassion. The concept that I should treat others the way I would like to be treated. I have friends who sometimes say stupid things but they’re still my friends. Should I treat strangers any different? After all, they’re just as dynamic. And sometimes I say stupid things, but I still give myself the benefit of the doubt and more often than not give myself a pass because I know myself pretty well – shouldn’t I give others that same dignity? Even Jesus asked forgiveness for those nailing him to the cross. My faith teaches me that God knows us better than we know ourselves. Shouldn’t we try to live up to that standard and get to know each other as much as we can? 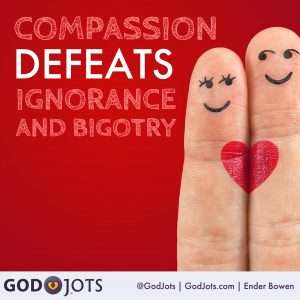 The only way to fight hate is with love, and you can’t genuinely love if you don’t communicate, because you can’t truly love if you don’t know anything about the other person. And (as I’ve said before) once you truly know and love someone, you find yourself wanting for them, even if it opposes your wants. That’s where compromise and real tolerance happen.

As opposed to, you know, the kind of tolerance that actually doesn’t tolerate someone flying a flag we don’t like.

Me… I look at this flag as a reminder of how terrible things can get with our own family, our own nation, our own brothers, when we stop genuinely listening to each other and communication breaks down to the point of hostility. Were I to fly this flag in my yard it would be as a reminder of and a memorial to the people who fought and died (on both sides) to get that to sink into our heads, in our time. It’s something we shouldn’t forget, and it’s something that – of all the flags we fly – is fairly unique to this one.