Do You Truly Love Your Neighbor As Yourself?

“Love Your Neighbor” doesn’t just mean to treat someone else the way you would wish to be treated. It means to love your neighbors as if they were you.

What Does “Love Your Neighbor” Mean?

One of the most important commandments in Christianity (and, I would argue, all of humanity) is “You shall love your neighbor as yourself.” (Mark 12:31). You may have also heard this at some time in your life as “Treat others how you would wish to be treated”; or “Do unto others as you would have them do unto you”; or “Hey, do you want this other pretzel? I bought it for the table, so…”.

But have you ever really stopped to think about what it means? Beyond the simple “hey everyone, let’s be nice to each other”? And in thinking beyond that, have you applied what you derived from its true meaning? Have you done what it requires of you?

Mind you, this is not a judgment of you that I’m making. Surely, I couldn’t do that based on absolutely nothing. What I am suggesting, however, is that while you may be doing your best to treat others fairly – because, after all, that’s how you would want to be treated – you may also be missing the entire point of the commandment itself.

And that commandment is, fully and truly, about Love. Specifically, Love through Compassion.

C.S. Lewis On “Love Your Neighbor”

One of my favorite religious philosophers is C.S. Lewis. What I love about his works – from The Screwtape Letters to The Great Divorce – is his imaginative and whimsical approach to understanding the glory of God. In particular, it is in Mere Christianity that we find his most practical take on the concept of Jesus – so convincing despite its dated cultural and societal framework that it had a major effect on my discovery of Christ. Among the many things he discussed – from the source of morals to the work that God does in you – his illuminating explanation about the true meaning behind “love your neighbor” is what captivated me the most.

I remember Christian teachers telling me long ago that I must hate a bad man’s actions but not hate the bad man: or, as they would say, hate the sin but not the sinner. …I used to think this a silly, straw-splitting distinction: how could you hate what a man did and not hate the man? But years later it occurred to me that there was one man to whom I had been doing this all my life — namely myself. However much I might dislike my own cowardice or conceit or greed, I went on loving myself. There had never been the slightest difficulty about it. In fact the very reason why I hated the things was that I loved the man. Just because I loved myself, I was sorry to find that I was the sort of man who did those things.

What Lewis is saying is that when we do something wrong, when we make a mistake or screw up, we don’t stop loving ourselves. In fact, though it may be hard sometimes because we don’t like the mistakes we make or the wrongs we do – intentionally or unintentionally – we ultimately forgive ourselves because we love ourselves. Sometimes we even go out of our way to make excuses for ourselves.

This does not mean people shouldn’t be punished for what they do. Nor that you should forget what another person has done. After all, you know you should be punished when you wrong someone (yet you don’t want yourself to be). And you don’t forget the mistakes you make. Otherwise how would you learn anything or know how to avoid that mistake in the future?

It’s much more than simply putting yourself in someone else’s shoes. I would equate that with empathy. It is, in essence, making that other person a part of you. His arm, her leg – they’re your arm and leg now. You are they.

The Basis For Compassion

This is something that goes much deeper than simple empathy. This is the basis for Compassion. By doing more than simply treating others as you wish to be treated (something that, while good, still keeps you at a disconnect or a distance) – by making them a part of you – you open the doors to so many things that go beyond just treating someone else fairly. You don’t just feel for them – you feel what they feel. You don’t just help, you want for them – even when those wants might be the exact opposite of your wants.

It’s also the route to truly understanding the concept of forgiveness.

“Love Your Neighbor” Is An Assignment

Though technology has made the world a smaller, much more accessible place, it’s also made it a much more difficult one. It seems like we have to be moving constantly, awake 24/7. We don’t have the time for other things and we certainly don’t have the patience for the hard stuff. So it makes sense that we would rather do the easy thing and either dismiss someone else. Or just not put the time or effort into the hard work it would take to be truly compassionate. I get that – I have a very difficult time with that myself. 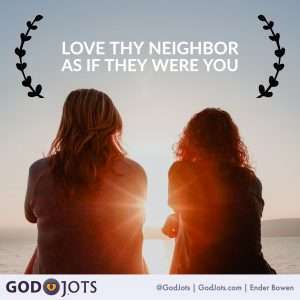 But I see commandments as something more than rules to follow. I see them as assignments. Your assignment is “to do this”.

So, I challenge you (as I challenge myself) to complete this assignment. The next person who does you wrong or ruffles your feathers or goes up your backside sideways, stop for a moment. Imagine if that were you. That should be easy because it likely has been you at one time or another. And imagine, not how you would have wanted to be treated by others, but how you would treat yourself. That doesn’t mean you let that person off the hook. It doesn’t mean they get away with something truly hurtful or terrible; but it does mean that now you have a much more compassionate angle by which to approach the situation. Through that you can forgive.

And you’ll be happy to.