These are people you care deeply about, after all. If you can’t show Compassion toward them, to whom can you be Compassionate?

The Politics Of Compassion


I don’t typically involve myself in politics. Political stuff tends to mess with one’s conception of Compassion. I keep my thoughts and my feelings pretty close to the chest. More often than not I’m afraid of being misunderstood. Considering how vicious and divisive politics can be, you may understand that sentiment. For a long time I debated even writing God Jots because I was afraid someone was going to take things the wrong way and be offended. Offending someone is the last thing I want to do.

My message is Joy. The mechanism is Compassion. My fuel is Love.

In the end, I have to trust that through my words, through my voice, and through my delivery, people will come to see my heart and, while they may still disagree (and that’s fine) know where I am coming from.

Of course, it doesn’t always work out that way. Particularly when anger is getting the best of you.

The Words Of Anger

Over the past couple of days I’ve seen a lot of anger on social media. Whether that anger is justified or not is irrelevant. It’s real, and thus must be acknowledged. It’s okay to be angry and to get it off your chest; and it’s okay to acknowledge it.

But, please be mindful of the words you use to direct that anger. It may seem as though things like “I’m afraid of all the racists and bigots who voted for Trump…” or “I can’t believe most of this country loves a traitor” are pointed at faceless people, but there are many whom you care about, and many who love you, who identify as being painted with that broad brush you’re using. You may not think so, and you may not have even thought about it, (and, hey, that happens), but, justified or not, it’s real, and thus must be acknowledged.

It can, and does, hurt a lot of unintended people.

It might be wise to find those with whom you share more than just a passing comment on Facebook or Twitter and learn more about why they voted a certain way. In doing so you might understand more about why so many others whom you don’t know voted that way as well. What you find may surprise you. 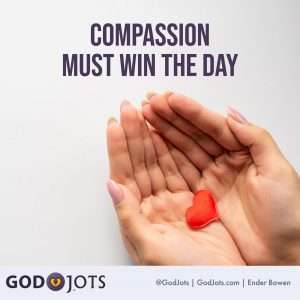 Look at what you’re about to post (or what you have already posted) and ask yourself who among those you care about might take offense to it. Whether you think it justified or not is irrelevant. Don’t pass it off or wave it away – acknowledge it. These are people you care deeply about, after all. If you can’t show Compassion toward them, to whom can you be Compassionate?

In truth, you have come to the conclusion that that family member is not any of those things because you know them; you know their heart. “Because they are family” is merely what allowed you the proximity (and, perhaps, assigned you the duty) to do so.

It’s easy to find things in a person we don’t like. It makes it easier to set aside those people with whom we disagree, so that we don’t have to deal with them.

It’s hard work discovering in people the things we deem worth loving. And that’s not often because it’s deep down within them – it’s because you’ve got to do a lot of digging within yourself.

Nothing worth doing is ever easy.

But Compassion must win the day.